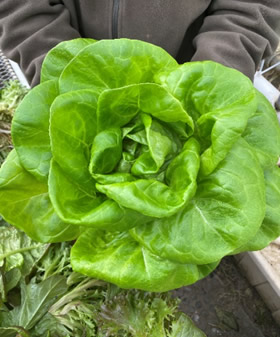 A Short History of Lettuce

A Short History of …  Lettuce

Shiloh Manor Farm in Loudoun County VA is not only a great spot to commit your love and life to one another.  It has a rich history as a center of agricultural production in Western Loudoun County since the 1740s.   When we are not busy helping our guests plan the perfect wedding celebration, we are working to put the property back once again in agricultural production.   One of the crops we specialize in is heirloom lettuce.  Growing up in the 1960s my family only knew one type of lettuce, the familiar Iceberg.  But today there are literally a hundred or more varieties of lettuce available.  At Shiloh we are currently producing 8 varieties for Magnolias on the Mill that are featured in their popular “Shiloh BLT Salad”.   In this blog we are going to look at the interesting history of lettuce.

Common lettuce, Lactuca sativa, has its origins in the Middle East where it is a distant member of the sunflower and daisy.  Archeologists have excavated ancient Egyptian wall murals depicting lettuce cultivation that are nearly 5,000 years old!   The Egyptians didn’t consider lettuce as food but rather as a medicinal plant.  Lettuce – especially the early and more primitive varieties – produces a milky sap when cut.  The ancients held that this sap was a painkiller and sedative.  It is easy to discount that, but modern studies have shown dried lettuce sap contains a chemical alkaloid called lactucarium which indeed has analgesic properties comparable to those of ibuprofen!

The Greeks learned how to grow lettuce from the Egyptians. They also used the sap medicinally as a pain killer and sedative where it earned the praise of Hippocrates, the father of medicine. The Greeks passed their lettuce-growing knowledge on to the Romans, who named the plant “lactuca,” meaning “milk,” a reference to its white sap. Over time, “lactuca” became anglicized into the word “lettuce,” while the original Latin was preserved in the genus name for lettuce and its relatives.

The Romans selectively bred lettuce for better-tasting leaves, and in about 77 A.D., the Roman author and naturalist Pliny the Elder recorded numerous cultivars in his Natural History. “The black lettuce [seeds] is sown in the month of January, the white [seed] in March, and the red [seed] in April; and they are fit for transplanting … at the end of a couple of months,” he writes, adding “the purple [seed], the crisped, the Cappadocian, and the Greek lettuce” to the list. Pliny also identifies an “inferior” lettuce with notably bitter leaves, now suspected to be chicory.  It is interesting that the Romans would typically cook lettuce leaves with an oil-and-vinegar dressing; however, smaller leaves were sometimes eaten raw. Post-Roman Europe continued the tradition of braising lettuce as well as the method of wilting raw lettuce salads by pouring a hot oil and vinegar mixture over the leaves.  Braised lettuce is still a common dinner vegetable in France and the recipe is included in Julia Child’s Mastering the Art of French Cooking. 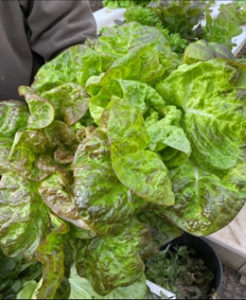 By the 1600s, European farmers in France, Holland and Italy developed a variety of firm-headed lettuces, as well as red-speckled romaine, red and green oak leaf, and curled leaf lettuces.  Lettuce became a staple of the European diet.  History records that Columbus – on his second journey to the Americas – brought lettuce seeds. In the early 1600s Pilgrim leader John Winthrop Jr. also brought lettuce seeds to Plymouth Plantation.

By the time of the Revolutionary War, lettuce was well established in the American diet.  Thomas Jefferson was such a fan that he grew 17 varieties of lettuce at Monticello. ‘Brown Dutch,’ from Holland, was one of his favorites. This loose-leaf lettuce with red-brown tinges was suitable for fall planting and winter harvest in Virginia’s mild climate. ‘Brown Dutch’ is one of the oldest surviving heirlooms which we grow here at Shiloh. ‘Green Capuchin,’ the parent of today’s ‘Boston’ lettuces, was another Jefferson favorite. He claimed this pale-green, buttery loose-head lettuce was low-maintenance.

Historically, produce was consumed near the point it was grown.  By the 1920s transportation by rail had become sophisticated enough to ship vegetables anywhere in the country.  Firm crisphead lettuces, which were grown year-round in California, could be shipped to urban areas around the US.  Because the firm, dense heads arrived packed in ice they became popularly known as Iceberg.

Tried and true, Iceberg dominated the lettuce market for 50 years.  Yet in the 1970s the culinary winds began to shift, and the look, taste and nutrition of produce became increasingly important.   Iceberg, while hardier and well suited to long-distance shipping and storage, is less nutritious and to many less visually appealing than butter, romaine, and leaf lettuce. In response to the demand for more varied and nutritious foods, other lettuce cultivars were soon developed or rediscovered and introduced into the market. 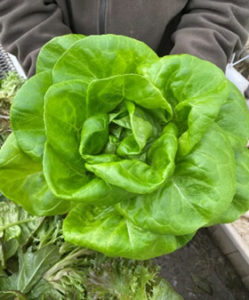 Over the last 25 years, lettuce mix has become trendy gourmet fare. At Shiloh we grow heirloom  (non GMO) and organic varieties of green and red butter head, green and red oak leaf, a red leaf lettuce and green and red sweet crisp and romaine.  Next time you are eating a healthy salad take a moment and contemplate the 5,000-year history of lettuce and be thankful for the farmer who works so hard to produce it!

Classic Music in the Light of Culture