Classic Music in the Light of Culture

By atiadmin in Blog, Music, Weddings Posted On December 03, 2021

For those who attended the Wheatland Concert Series recital at Shiloh Manor Farm this last Saturday, November 20th a hearty thanks! What an enjoyable evening together! While the performances and catered dinner were fantastic, the best music, food and wine means little without others to appreciate and share it with. And that is a fundamental characteristic of art, and of music in particular… it is meant to be enjoyed together. 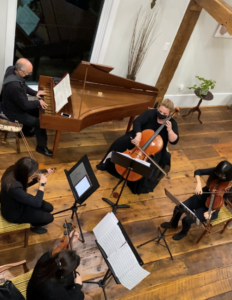 I am a scientist by training, and science is based on definitions. Einstein showed that the energy latent in matter is defined by its mass. So how can we define art? My definition (not found in any dictionary and open to debate!) is that art is the physical representation of immaterial conscientiousness and perception. There is a fair bit to unpack in those few words, but the point I would like to share here is that art begins before the paintbrush touches the canvas or notes are written on paper; there is a spiritual dimension to art and music.

I have read a number of books by C. S. Lewis. There is a lot to commend about his work, but perhaps my favorite scene is the Narnian creation account found in The Magician’s Nephew. There we read:

“In the darkness something was happening at last. A voice had begun to sing…it seemed to come from all directions at once…Its lower notes were deep enough to be the voice of the earth herself. There were no words. There was hardly even a tune. But it was beyond comparison, the most beautiful noise he had ever heard.”

After this, Lewis tells us that those present looked up and suddenly the blackness of the sky was filled with stars. Each of the stars were singing as well, but the voice of the stars grew fainter as the voice of the one singing drew nearer. The wind then began to blow, the blackness of the sky turned to grey, and hills began to stand up around them. The sky changed to pink and then to a brilliant gold, and as soon as the voice swelled to a mighty sound like a waterfall, the sun rose over the hills. And in the light of that first morning, they all could see the source of the singing, a huge lion – Aslan – standing in the middle of the valley. With each step the singing lion took,trees and mountains and animals and rivers and flowers and all sorts of things burst into being, until finally, all was created ex nihilo – out of nothing. Aslan stood in the center of a circle created by the all the animals he had just made, and he said to them, “Narnia, Narnia, Narnia, awake. Love. Think. Speak. Be walking trees. Be talking beasts. Be divine waters.”

I think it’s significant that music – the physical projection of Aslan’s consciousness – is the creative force that gives rise to the universe and the consciousness of others in it. For the modernskeptical mind, the concept of creation ex nihilo is fantasy. We are told the big bang, evolution and quantum mechanics has all the answers. But I’m here to tell you that if science has proven anything over the last 100 years it is that what we know today about the physical world is dwarfed by what we do not know and the more we know, the greater the mystery. And you don’t need to look to the infinitesimally small or astronomically large to find mystery. Just look in a mirror. Our consciousness is immaterial and capable of creating things out of nothing. Not even the most advanced neuroscience can explain what consciousness is, where does it reside and what makes us conscious. And you cannot talk about the realm of the immaterial without talking about God.

So, what is the connection to chamber music?

While some might disagree with me, I assert that all music is based on a belief system, and good music is based on good theology. We are created in God’s image. It is in our nature to imitate Him, and we are driven to create. Not every composer of the Baroque era (or reader of this blog!) may share the same theological beliefs or strength of conviction. But what is undoubtedly true is that the world that gave us the Baroque repertoire viewed the God of the Bible as the center, and that fact inspired the music of the era, and is even encoded in it. What Bach and other composers of his time understood is that beauty happens when we focus our creative ability up, in the imitation of God. Bach and his generation saw all music tied in with the nature of God, the doctrine of the Trinity, the incarnation, death and resurrection, and the second coming.

Now talking about God and western European music is a little like mixing matches and gasoline. While it has become popular today to demonize western culture and music as inherently supremist, in his book “Culture Counts: Faith & Feeling in a World Besieged,” British philosopher Roger Scruton unapologetically argues that “the musical culture of Western civilization [is] arguably one of the most lasting achievements of that civilization and one in which the greatest treasure of sentiment has been instilled.” While all cultures around the world have and possess beautiful traditions and music, it is an undeniable fact of history that the Christian culture of mediaeval and reformation Europe gave rise to the system of clear and consistent musical notion, diverse instruments and concepts of polyphony, harmony and tonality which are the crowning achievements of Classical music in general and Baroque music in particular. Bach and others in his generation would be horrified at the suggestion that they or European culture was in any way superior… their response would no doubt be one of profound humility and thankfulness to God for his inspiration and gifts.

Even before the pandemic there was a lot of confusion, isolation, and fragmentation in our world. The erosion of culture, relativism and globalization has caused incalculable misery. Materialism, scientism and atonalism led to the ‘disappearance of the soul’ from music. But as we enjoyed together at Shiloh Manor Farm this past Saturday, the Baroque repertoire still exists and even after three hundred years it stirs the emotions and binds us together. Why? Because it resonates with the one thing all humans have in common, our unity as beings created in the image of God. Bach and other great composers of his generation still remind to look up as they did to find the Source of inspiration and beauty.

A Short History of Lettuce