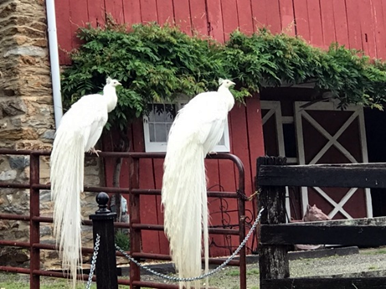 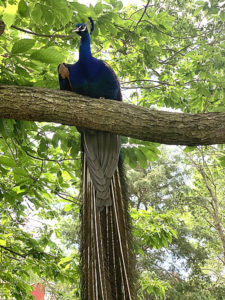 One of the first things you will probably notice at Shiloh Manor Farm in Loudoun County are the peacocks!  We currently have 9 peafowl that call Shiloh home.

First originating in India, peafowl can trace their history back to biblical times.  They are mentioned in the Bible as being part of the treasure of gold, silver and ivory taken to the court of King Solomon.  They are also associated with Alexander the Great.  In his 1812 book The History of Animals, author Noah Webster writes:

“As early as the days of Solomon, these elegant fowls were imported into Palestine.  When Alexander was in India, he found them in vast numbers on the banks of the river Hyarotis, and was so struck with their beauty, that he forbid any person to kill or disturb them.” 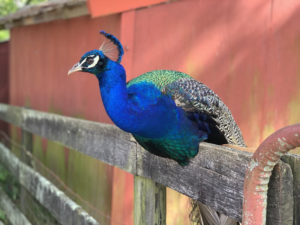 Peacocks were also important in Roman times, both symbolically and unfortunately as a frequent dinner guest.  They were considered a great delicacy and remained on the menu of the royal houses of Europe until the 16th century when their new world cousin the turkey was discovered.

In his 1836 book On the Mental Illumination and Moral Improvement of Mankind, Reverend Thomas Dick calls the peacock “the most beautiful bird in the world.”  Not everyone however agreed with this description. Charles Darwin once said, “The sight of a feather in a peacocks tail makes me sick” as they serve no evolutionary purpose and did not fit the model for natural selection. 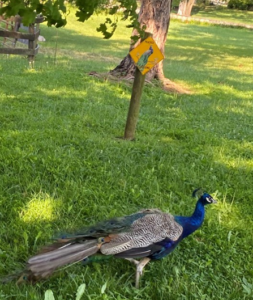 Much like its avian brethren, the crow and the raven, the peacock has figured heavily in folktales and fables, as well as in countless superstitions.  In Greek Mythology, the peacock was believed to have sprung from the blood of Argos Panoptes, the hundred-eyed giant.  Later accounts state that it was Hera who, upon the death of Argos, placed his eyes in the peacock’s tail herself or—alternately—turned Argos into a peacock.  Because of this connection, the Routledge Handbook of Greek Mythology explains that the peacock was the “special bird of Hera.”

The cry of a peacock was believed to predict the coming of wet weather, while their presence—or that of their feathers—inside a house might well lead the unmarried ladies in residence to end up old maids.  Peacock feathers were also believed to bring bad luck in a theater, either by initiating disaster among the props and the actors, or by causing the play to fail. 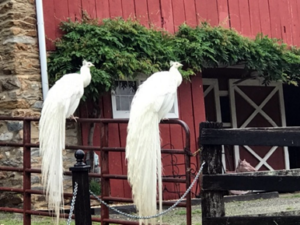 By the 19th century, peacocks served mainly as fashionable lawn ornaments at fine country houses.  In his “The Young Naturalist’s Book of Birds: Anecdotes of the Feathered Creation” Percy Bolingbroke St. John refers to them as “the royal section of the feathered race.”  While the 1844 book of Zoological Sketches calls the peacock “more ornamental than useful,” stating:

“…his form is so elegant, and his plumage so fine, that he is generally kept with great care in the grounds of his owners in the country, for the sake of his beauty; and there he may often be seen, walking with firm and slow steps along the gravel walks, or perched upon some parapet, or on the branch of a lofty tree, while he holds up his head and spreads his richly-coloured train, as if waiting to be admired.”

Why do we have peacocks at Shiloh?  Shiloh was carved out of the wilderness in the 1740’s by pious Quaker farmers fleeing religious persecution.  The property remained in the same family from 1747 to 1979.  Over the centuries the pious Quakers farmers who worked the land transformed into doctors and dentists and with that transformation the property fell into disrepair.  It was purchased in 1979 by a well-known equestrian Dr Joe Rodgers who undertook the renovation of the residence.  Along with the sunken roof and floor timbers, the residence was home to many snakes who found shelter in the old stone walls.  Rather than deploy poison, Dr Rogers attempted an innovative solution:  peacocks.  While it can be debated if peacocks can really predict rain or bring bad luck to theatres or turn unmarried girls into old maids, we know that peacock’s prey on snakes and they will not hesitate to take on even poisonous snakes.   We have lived at Shiloh for 21 years and during that time I have seen one snake a testimony to the peacock and the role they play in the web of life!