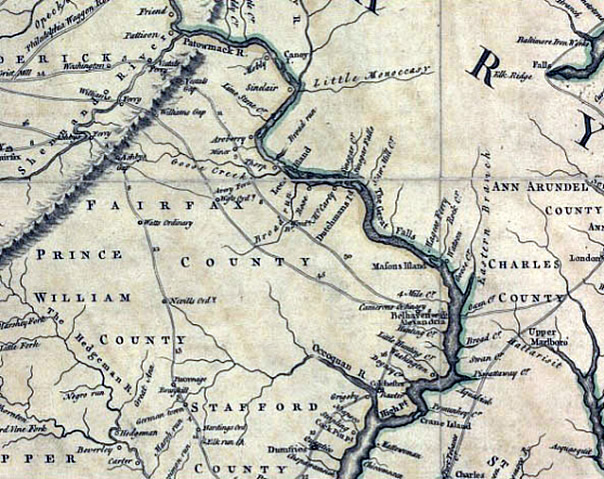 In the name of God, Amen.  I George Nixon of Loudoun County in the State of Virginia being far advanced in years and afflicted with infirmities and sickness, but thro God’s great mercy of a sound mind of understanding and in the free use of my reason do make this my last will and testament as follows:

In the 274 years since Shiloh Manor Farm was first settled by the Nixon family, there have been both many happy and somber events.  During the closing year of his life in 1797, family patriarch George Nixon drafted a Last Will and Testament that provides interesting insights into his life and times.

Nixon was a pious Quaker who fled religious persecution in Ireland in the 1740s.  At that time, William Lord Fairfax owned an immense land grant running from the Rappahannock River to modern day Harpers Ferry; about 5 million acres in total.  He was offering favorable terms to those who would farm it.  By the time Nixon accepted the invitation and arrived with his wife Mary, there already was a community of Quakers settling the Catoctin Mountains, farming the land owned by Lord Fairfax.  Nixon arrived at the frontier with nothing and died a prosperous man.  What can we learn from his life? 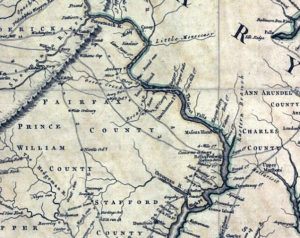 Fairfax County (including the future Loudoun County in 1751)
www.robertstoy.com

First, George Nixon was a man of conviction.  His Last Will begins with the words, “In the name of God, Amen.”  It is not easy to be an outlier in any society, particularly on the frontier.  The movement we call Quakers was founded by George Fox in England in the mid-17th century. The son of a weaver, Fox lived in a time of great social upheaval and civil war. He rebelled against the religious and political authorities by proposing an unusual and uncompromising approach to the Christianity.

When Fox began to spread his evangelical Christian message, with his emphasis on “the necessity of an inward transformation of heart,” as well as the striving towards Christian perfection, it drew violent opposition from clergy and laity alike.  Fox wrote that “The professors [professing Christians] were in a rage, all pleading for sin and imperfection, and could not endure to hear talk of perfection, or of a holy and sinless life.”  While the Protestant Reformation did much to emphasis the need for Christian holiness, the foundation of the Reformation was solidly on the Bible, the Word of God.  In response to the medieval Roman church, the Reformers would proclaim the “Five Solo:” “Solo Scriptura, Solo Fide, Solo Christus, Solo Gratia and Solo Deo Gloria!”   “The Bible Alone, Faith Alone, Christ Alone, Grace Alone, God’s Glory Alone!”  In contrast, the Quakers taught that salvation came not only from the ministry of the Word, or by even by faith in Christ, but from within, by following the “inner light” of God’s Spirit.  This was antithetical to the Reformer’s view that the only absolute truth that could be known about God was from the revelation contained in the Bible.

It did not help matters that Quakers challenged social norms in other, more outward ways.  They refused to doff their hats before magistrates or to swear oaths. They opposed any kind of war or violence.  And despite strong patriarchal elements, Quakers allowed women to bend the traditional roles that existed in the Christian church.  There was a price to be paid for embracing views that many considered outside of orthodoxy.  But many Quakers did just that and many paid the price.  Agree or disagree with the particulars, but George Nixon was a man of conviction. 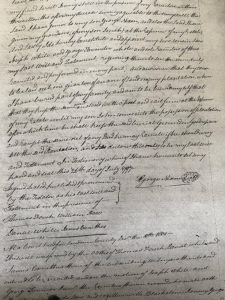 George Nixon was a man of industry. He arrived in Loudoun County a penniless immigrant from Ireland and died a wealthy man.  By the time of his death, he controlled about 1000 acres of land, “my plantation,” including a gristmill, sawmill and much livestock.  Personal items listed in his will seem extravagant given the times, including silverware, a bookcase and ‘dish’ of books, walnut table, chairs, and chests.  It is a matter of history that Quaker businessmen were often successful because they felt a strong conviction to set a fair price for goods and not to haggle over prices. People trusted them and knew that Quakers were committed to quality work, and that what they produced would be worth the price.

George Nixon was well respected and generous.  Nixon was meticulous in remembering his entire extended family as well as his friends in his Last Will.  The first priority in his Last Will, listed even before the support of his widow Mary, was the retirement of all his personal debts.   Financial gifts in Nixon’s Last Will are denominated in “pounds current money.”  It is impossible to attribute an accurate value to his personal estate, but it almost certainly was in the millions of today’s dollars.  It is interesting that in the case of his children and grandchildren, he usually required the attainment of a particular age before their inheritance from him would vest.  In was normally given as 21 years but for one individual it was 40 years of age.  In other cases, for reasons impossible to know, he specified that an inheritance was to be awarded not on attainment of a specified age, but on years following his death, typically two or three years.  He wrote as a man of deliberate judgement, who knew his family, and who was the recipient of much good will in his life.  He was generous to others.

And lastly, George Nixon had a vision for the future.  The single most obvious observation reading his Last Will was the degree that Nixon valued his land.  He gave away a fortune of money, but also many hundreds of acres of land to each of his children and grandchildren, including land given to his son Jeames (sp) that today we call Shiloh.  He had a sense that the American experiment would succeed and that the land he struggled to clear and cultivate, and the home and barn that he built from stones pulled one by one from the fields, would be worth something.  That was far from certain in 1797.  Washington was in the last year of his Presidency (he would die at Mount Vernon 2 years after George Nixon).  The first national crisis, a tax uprising known to history as the Whiskey Rebellion, threatened to shatter the Republic.  France devolved into chaos and threatened war against the U.S.  The Burr-Hamilton duel was still 7 years in the future, but tensions were rising between the Federalist and the Democrat parties and even Washington himself was not immune to political attacks.  Successive waves of economic crisis would come, including: The Panic of 1796-1797, The Recession of 1802-1804, The War of 1812, The Crisis of 1825-1826, The Crisis of 1847, The Civil War…  But Nixon, who together with his sons supplied the Continental Army with food and supplies, believed in the American experiment and that the toil of his day would bear fruit in future generations.

At Shiloh Manor Farm we try hard to embrace the same values as the man who built our home one stone at a time.  We are convicted of the mercy, goodness and justice of God, the value of hard work and patience, the virtues of generosity, humility and hospitality and vision of and hope in the future.

What is in a Wedding Vow?

Is a barn wedding right for you?